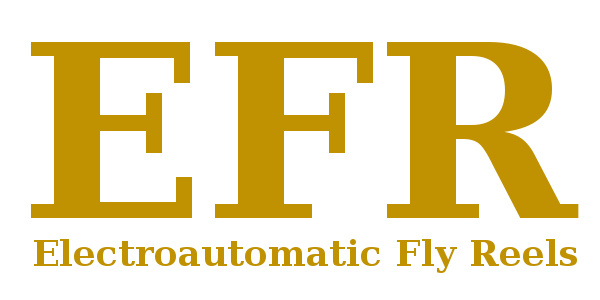 
We will try to soon add much more stories and pictures about fly fishing with EFR Electroautomatic Fly Reels. So please check this page for updates regularly.

EFR Electroautomatic Fly Reels contain an electric motor and rechargeable batteries and allow you to reel in the line fast, with minimal motion and without the use of your second hand. On the one hand the electric drive is simply convenient, especially in locations where you frequently change the spot. On the other hand it may even improve your success. Less motion, less disturbance, reduced risk of line clusters and more time with the fly on the water increase your chance for a big - or a small - catch.

The first fish caught on an Electroautomatic Fly Reel

Back in 2018 on a warm November days evening we met two friends to enjoy a few hours fishing for grayling in the lovely river Aare near Bern in Switzerland. The first mostly functional prototype of EFR got finished just the same day, and of course we were eager to try it out. The first hour passed by and everyone had a catch or two. Except me. I had spent my time sorting a line cluster the prototype had caused, fixing some problems with the batteries and tightening some screws. And of course reeling the line in and out back and forth in all kinds of situations a bit away from the best spots.

As the light got dimmer a small hatch started and a few grayling began rising for insects close to where I was experimenting. I took a shot and watched my orange spent drift downstreams. No luck today. But just as lifted my rod to prepare for the next cast a small grayling grabbed the fly. I was taken aback a bit and automatically started to drill working the line as i was used to. After a few seconds i realized that i was testing the EFR. I pressed the button and it worked wonderfully. After about a second all that slack line that was floating around from my previous casting experiments was on the reel. I let the line go and simply kept pushing the button. The motor kept the line under perfect tension, while the break avoided any excess force. Little later i had the fish at my feet and happily released the little grayling back into the stream. It was not a big fish, but one i will always remember.

A little bit of history

As we sat together during a hot summer night in France a close friend and expert fisherman came up with the idea to develop an electric fly fishing reel. In a mix of curiosity and skepticism the idea evolved and in the following month a first prototypes was built. Even though it was handmade, chunky and the line got tangled often, it outperformed the convenience of traditional semi-automatic, automatic or geared fly reels. Over the course of the next year we fought countless problems till we finally managed to develop the ELECTROAUTOMATIC PROTO ONE series.

We are very interested in your experience with EFR Electroautomatic Fly Reels. Please share your opinion, your best catches, stories and pictures or any ideas for improvements! You can also support us by sharing the word about EFR offline or in social media. We are also planning to start a crowdfunding campaign to start a small series production of our fly reels, so please check this page for updates regularly.